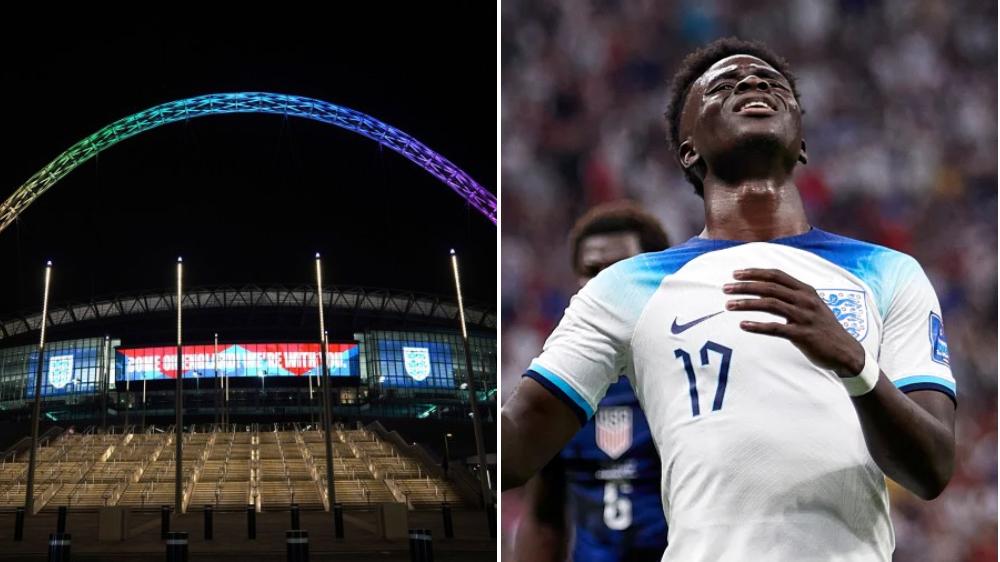 AL BAYT STADIUM — The rainbow colours shone bright and proud, illuminating the night sky while England played USA. Only it was back in London, on ­Wembley’s arch. Not actually in Qatar, where same-sex relationships are a criminal offence and where there happens to be a global spotlight burning fiercely on its every move.

The players, a group once known as Gareth Southgate’s social justice warriors for the way they united a hugely divided nation back home en route to the 2018 World Cup semi-finals out in Russia, did nothing at the Al Bayt Stadium. No hands covering mouths at the team photo, like Germany letting the world know they felt gagged by FIFA. No rainbow colours cleverly adorned on boots or training tops.

Fifa had threatened England with “unlimited” sanctions, FA chief executive Mark Bullingham claimed just before kick-off on Friday night, should Harry Kane wear the pro-LGBT+ OneLove armband at the World Cup. It was enough to scare them off.

Everyone was welcome in Qatar, we have repeatedly been told. Everyone except captains who want to wear an armband FIFA and the Supreme Committee – the World Cup’s organisers – (one or the other or both, it’s not entirely clear) have decided they disagree with. So the soundbites and statements that have repeatedly been wheeled out have, ultimately, been meaningless.

If LGBT+ fans have been made to feel unwelcome by football in England, nothing that the national team have done in Qatar is likely to have made them feel any differently.

“Although appreciative of the gesture, responding with something miles away from Qatar is more a way of getting brownie points than creating change,” Pride in Football, the network of LGBT+ fan groups in the UK, tweeted in response to @England sharing a picture of the Wembley arch accompanied by: “We’re with you.”

England’s performance was as empty as the Wembley arch gesture. The fluidity of the Iran game, players linking up like a side tortuously drilled by Pep Guardiola, evaporated in the unrelenting Qatar heat.

England were, arguably, edged out by USA. “It’s called soccer,” the American supporters chanted audibly in the first half, a sign of their growing confidence as Christian Pulisic rattled Jordan Pickford’s crossbar.

There has definitely been a vibe of England being guaranteed – what? – at least a runners-up medal after they dismantled tough-to-break-down Iran. Bukayo Saka was going to be top scorer. Jude Bellingham was favourite for the Ballon d’Or. Harry Maguire and John Stones had forged the strongest bond of possibly any England centre-back pairing in history. All that was hastily revised.

And full credit to America. They pressed high and feverishly. They controlled play in England’s half for long periods. They stuck numbers on Bellingham to smother England’s nucleus of the Iran game.

It left some scratching their heads as to why England had completed 180 minutes of the World Cup and Phil Foden was yet to play.

Even a large contingent of the England fans in the stadium who had, let’s not forget, forked out enormous sums for this, began whistling and jeering when the players tried and failed, once again, to build up some kind of attack from the back.

To his credit Maguire continued his immense form from the first game, somehow transforming almost entirely into forehead as he repelled set piece after set piece. Although it speaks volumes when your centre-back is by far your best player.

It was a strange game befitting a strange World Cup. A lightning bolt of an opener followed by thunderous disappointment. And who can tell which England team will turn up in their final group game?

After the Germans were so heavily criticised for having der Hoden to stand up to Fifa and then losing a game of football, at least England proved you can take no stand at all and play just as badly. Boos rang round the stadium at the final whistle.

We are with you. The England fans are, on balance, probably just about still with England. But another stilted performance against Wales in the final group game and they will be about as with them as standing up for LGBT+ rights 3,000 miles away.