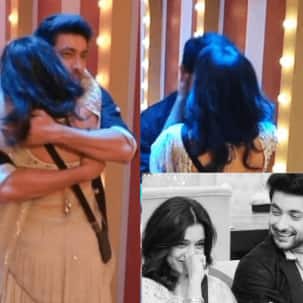 Bigg Boss 16 is raking high TRPs thanks to all the fights and drama that are going on inside the house. A lot of drama took place over the past few days. Sumbul Touqeer Khan, Shalin Bhanot and Tina Datta’s equation has taken a turn and how. The Imlie actress was a target of the other two after they got to know that her father spoke to her over the phone. Later, her co-star Fahmaan Khan entered the show and it made her happy. But Fahmaan’s stay in Bigg Boss 16 house was short. He has now exited the show and SuMaan fans are emotional. Also Read – TOP TV News Weekly Recap: Bigg Boss 16 sees epic reunion of Fahmaan Khan and Sumbul Touqeer, Nakuul Mehta and Disha Parmar to exit BALH2 and more

Salman Khan over Shukravaar Ka Vaar announces that Fahmaan Khan was a part of the show only for a day and he is not the wild card contestant of the show. And then Fahmaan Khan makes his exit. Of course, Sumbul Touqeer Khan gets emotional but does not make a fuss about it. Rather, she kisses him on the forehead and that has made all their fans go aww. Also Read – Bigg Boss 16: Fahmaan Khan gives reality check to Shalin Bhanot in Galatfehmi Ke Gubbare; Sumbul Touqeer radiates joy [Watch Promo]

Check out tweets on Fahmaan Khan and Sumbul Touqeer below:

Can we stop the time here ???
U don’t believe me whatever I wished so 4 hav come true?. My close friends knw that wished for this forehead ki*** since they are meeting after a long time. Evil eyes stay away from this brilliant friends ?#SuMaan #FahmaanKhan #SumbulTouqeerKhan pic.twitter.com/Yf8gJ39OFu

I am happy and relieved today. I am sure anyone who has been watching BB for sum wud feel a sense of calm. He lived a day with her and gave her good memories to cherish. Bless u both ❤️#FahmaanKhan #SumbulTouqeerKhan pic.twitter.com/lMsUcWSMyR