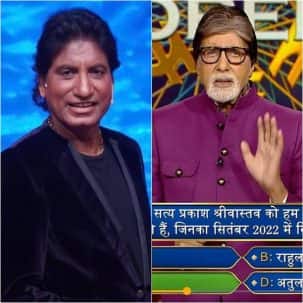 On September 21, ace comedian Raju Srivastava passed away at the age of 58 six weeks after being hospitalised at the All India Institute of Medical Sciences in New Delhi. During his hospitalisation, Amitabh Bachchan had sent a voice recording to Raju’s family in an attempt to wake him up from coma. And now, the late comedian’s family has once again thanked the megastar for remembering Raju Srivastava on Kaun Banega Crorepati 14 (KBC 14) through a question. Also Read – Siddhaanth Vir Surryavanashi, Sidharth Shukla, Raju Srivastava and more celebs who died due to heart attack

Expressing their gratitude towards Amitabh Bachchan, Raju Srivastava’s family shared a few screenshots of Big B’s quiz show where the megastar had asked a question related to the comedian. Also Read – World Heart Day 2022: Celebs who lost their life to heart attack

“How do we better know the comedian Satya Prakash Srivastava, who passed away in September 2022?” the question read. The options were: A. Bhanu Srivastava, B. Rahul Srivastava, C. Raju Srivastava, and D. Atul Srivastava. Also Read – Raju Srivastava’s daughter Anatara thanks Amitabh Bachchan for being there during his tough time: ‘Aap papa ke andar pure base hue the’

Penning a heartfelt note for Big B from Raju Srivastava’s official Instagram handle, the family said, “We’re sincerely thankful to you Shri @amitabhbachchan uncle for showering your love and blessings for dad #rajusrivastava by remembering him through a question in your renowned show KBC (Kaun Banega Crorepati) last week. This is the fourth time that a question has featured about him on the show. (folded hands emoji) Special thanks to @sonytvofficial.”

Earlier, Raju Srivastava’s daughter Antara had penned a heart-melting note for Big B to thank him for being with her family in the tough times. She had added that her father saved the cine icon’s number as ‘guruji’. She had also talked about how Raju had moved his fingers when he was made to listen to his audio clip, which showed what Amitabh meant to the comedian.

Raju was rushed to hospital on August 10 and put on a ventilator after he complained of chest pain and collapsed while working out in the gym.