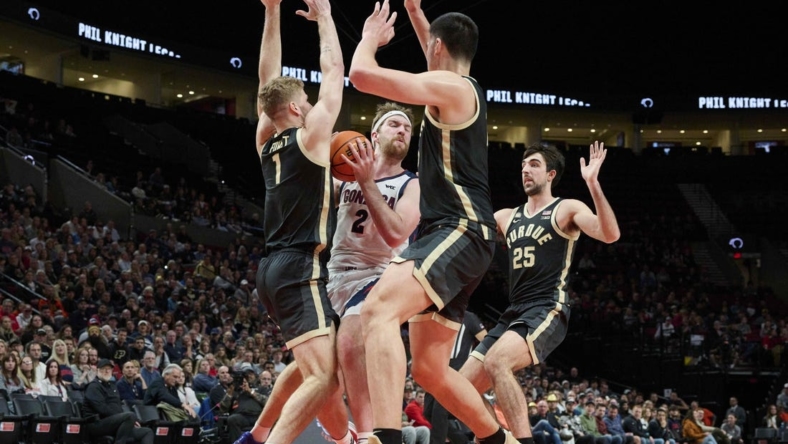 Zach Edey scored 23 points and grabbed seven rebounds as No. 24 Purdue defeated No. 6 Gonzaga 84-66 in the semifinals of the Phil Knight Legacy tournament Friday night in Portland, Ore.

The Boilermakers (5-0) will meet No. 8 Duke in the championship game Sunday afternoon, while the Bulldogs (4-2) will face Xavier for third place.

Drew Timme led the Bulldogs with 22 points and grabbed nine rebounds. Nolan Hickman and Rasir Bolton were the only other Gonzaga players in double-figures with 15 and 11 points, respectively.

Gonzaga starters Julian Strawther and Anton Watson, who combine to average 22.6 points per game, were held to four on 2-for-11 shooting.

The Boilermakers built an eight-point lead late in the first half and again early in the second half before the Bulldogs finally got their transition game going, with Timme scoring on a spinning layup off a steal by Hickman and Bolton pulling up for a 3-pointer in a 7-0 run to get within a point.

However, the Boilermakers responded moments later with a 9-2 run to restore the eight-point lead.

Purdue’s advantage remained between six to eight points until Caleb Furst made a 3-pointer from the corner to extend the advantage to 57-45 with 8:39 remaining, and the Boilermakers pulled away late.

Gonzaga bolted to a 12-4 lead as Purdue missed 10 of its first 11 field-goal attempts.

But the Boilermakers started pushing the ball inside instead of settling for 3-pointers and tied the score at 16-all on an Edey dunk off a lob from Loyer with 7:01 left in the half.

Purdue broke a 23-all tie with an 8-0 run that was sparked by an Edey jumper.