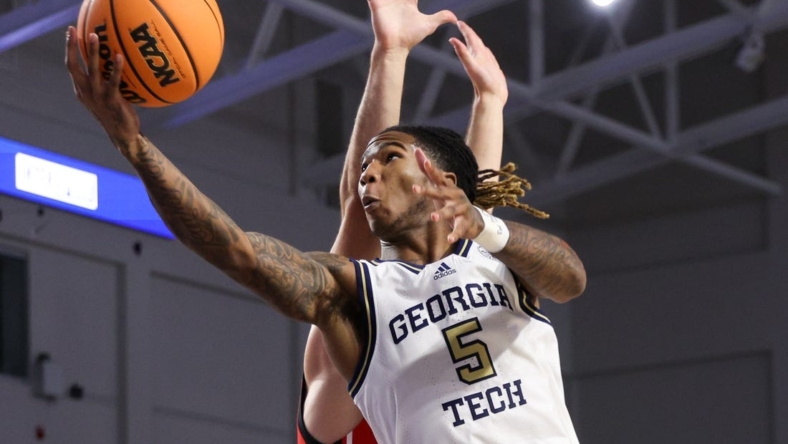 Georgia Tech, after dropping consecutive games in the Fort Myers (Fla.) Tip-Off, returns home to face North Alabama on Saturday in an effort to return to its winning ways.

The Yellow Jackets won three straight to open the season before heading to the Sunshine State for their Thanksgiving event. Strong starts are a rarity for Georgia Tech under Josh Pastner, and the team failed to notch its first undefeated start through four games since 2008-09.

In losses to Utah, 68-64, and Marquette, 84-60, the Yellow Jackets failed to execute their defense efficiently. Georgia Tech found itself facing double-digit deficits in the first half of each game.

The most glaring lack of defensive production came against Marquette. The Golden Eagles shot 47.5 percent from the field and made nine 3-pointers.

“We didn’t get stops,” Pastner said. “Our defense wasn’t performing at a high level, so we weren’t able to get stops and run in transition. We are trying to play faster, get more possessions and play more up-tempo. We couldn’t get stops, and that’s not who we are.”

Georgia Tech did find a silver lining in the effort of Ja’von Franklin. He scored 17 points and 14 rebounds against Marquette, his second double-double in a three-game span.

Before leaving Atlanta, Georgia Tech did turn in some strong defensive performances, holding Georgia State to 57 points and Northern Illinois to 50. Now, the Yellow Jackets hope a return home means an increase in production.

“We are a really good defensive team from each and every position,” Georgia Tech guard Deivon Smith said. “We’re on a string and each guy is helping each other. Guys are switching and we’re talking a lot. Everybody is on one accord, and everyone is working hard on the defensive end.”

North Alabama and Georgia Tech will meet for the first time in program history.

The Lions (4-2) are set to play their third game of the week, having split a pair in Santa Barbara, Calif. North Alabama earned a stunning, 75-74 win over Hampton on Tuesday when Jacari Lane completed two three-point plays in the final 11 seconds.

A blocked shot by Daniel Braster before the buzzer sealed the victory.

“We knew that Hampton was a team that was not going to go away,” Lions coach Tony Pujol said. “We played a little nervous at first but settled in and began to play defense really well. We were able to get stops when we needed to down the stretch.”

Daniel Ortiz scored 23 points in the win, and Lane added 15.

The next day, North Alabama fell 89-71 to UC Santa Barbara. Damian Forrest topped the Lions with 15 points, while Ortiz had 13 and KJ Johnson and Lane contributed 10 apiece.

Ortiz is the team’s leading scorer at 18 points per game, while Forrest adds 10.7 points and 6.7 rebounds per game.