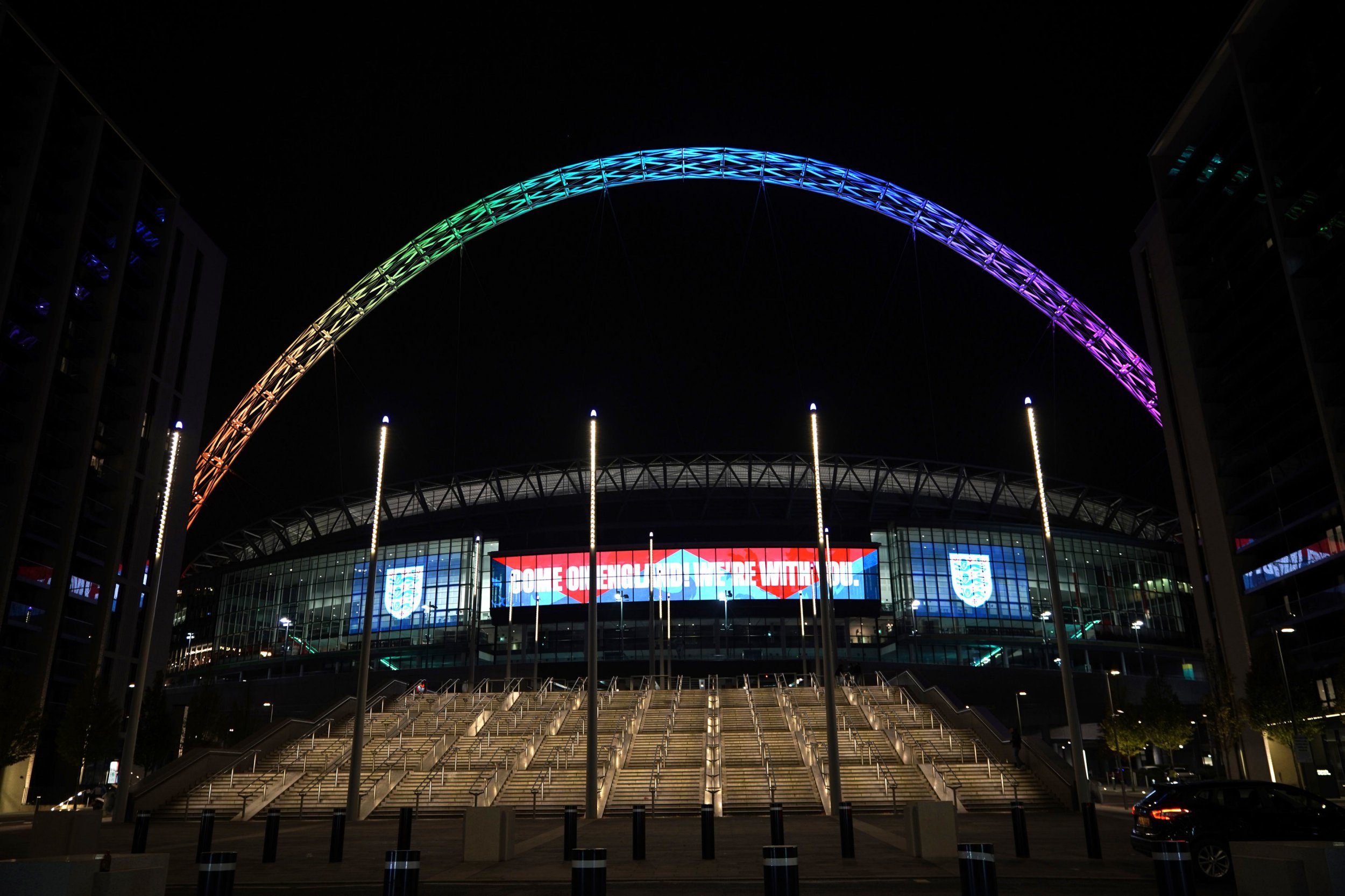 England players were warned by Fifa they face “unlimited” disciplinary action if they wear the ‘OneLove’ armband during the World Cup, the FA’s chief executive revealed last night as the Three Lions laboured to a 0-0 draw against USA.

England FA chief executive Mark Bullingham revealed the threat shortly before the Three Lions took to the pitch at the Al Bayt Stadium last night, with no sign of a protest from captain Harry Kane or any other players against anti-gay laws in Qatar.

It came as the Wembley arch was lit up with rainbow colours 3,000 miles away in north London, in a move which was greeted with disappointed by LGBT fan groups.

Mr Bullingham said: “It’s very important to understand what happened here. We have been clear that we wanted to wear it and we were committed. We announced that we would do that in September we had a lot of meetings with FIFA over that period and on Saturday before the game we felt we’d reached an understanding where we would wear it. We hadn’t got permission but we would face a fine for it.

“Unfortunately then on the day of the game they gave us ten minutes notice – two hours before we were due to go to the game… they came here with five officials and they ran us through a scenario where at a minimum anyone wearing the armband would be booked and face disciplinary action on top of that.”

Supporters group Pride In Football, criticised the rainbow gesture at Wembley, saying: “Reacting to human rights problems with lighting up Wembley arch miles and miles away from the problem is not going to fix anything.”

Carl Fearn, co-chairman of Gaygooners, Arsenal Football Club’s supporters group for LGBT fans, said: “This is a welcome, but small, gesture by the FA.

“It would, though, have had far more meaning if Fifa and Qatar had lived up to their promise of a warm welcome for all and allowed it to happen in Qatar rather than thousands of miles away in England.”

Millions of supporters made the most of the Friday night kick-off as they packed into fan parks, pubs and around television sets to watch Gareth Southgate’s side take a tentative step towards the last 16.

Hours earlier, Welsh fans were left heartbroken as two late goals left them defeated 2-0 by Iran and needing a win over England on Tuesday to have any chance of qualifying beyond the group stage.

In an interview with ITV Sport screened ahead of England’s Group B game, Mr Bullingham revealed that Fifa informed the FA just hours before their opening game with Iran on Monday that any player wearing the armband would face “unlimited” disciplinary action on top of a yellow card.

He said: “It’s very important to understand what happened here. We have been clear that we wanted to wear it and we were committed.

“They gave us 10 minutes’ notice – two hours before we were due to go to the game… they came here with five officials and they ran us through a scenario where at a minimum anyone wearing the armband would be booked and face disciplinary action on top of that. It was unlimited.”

Welsh fans were allowed to take rainbow-themed bucket hats and flags into the Ahmad bin Ali Stadium. The items, which represent Wales’ LGBT+ supporters’ group, had been confiscated from some fans by security ahead of their opener against the USA.

The Netherlands, another of the nations to abandon the OneLove campaign, drew 1-1 draw with Ecuador yesterday. Manager Louis Van Gaal had said the team were in Qatar “to be a world champion” and did not want to risk suspensions.

The spotlight will again be on the German team ahead of their clash with Spain on Sunday. Their football association, the DFB, is taking Fifa to the Court of Arbitration for Sport over its move to ban the OneLove armband.

A quick ruling against the validity of the ban could allow German captain Manuel Neuer to wear the armband without sanction.