There’s been an uproar of excitement as Nollywood stars Kate Henshaw, Chioma Akpotha and Michelle Dede gear up for a stately white wedding celebration between superstar actress Rita Dominic and her hubby Fidelis Anosike.

The couple had their traditional wedding earlier in the year in Imo, the bride’s home state, while an event was made of Rita Dominic’s arrival at her husband’s family home in Anambra state.

However, the celebration is not done yet, as the couple are finally ready to say I do in front of the lord, and this is set to take place in London on November 26, 2022.

Ahead of the big day, Nollywood power cast like Kate Henshaw, Michelle Dede (chief bride’s maid), Chioma Akpotha, who are all on the bride’s maid train, stormed UK where the occasion is to take place.

In new videos sighted on Chioma and Kate’s Instagram pages, Rita was overjoyed, as she was seen welcoming her colleagues.

The video showed the moment Rita ran towards them and shared a sweet hug with her trusted pals.

In one of the videos, Chioma noted that they linked up with Rita at the 900-year-old Abbey stately manor in North Yorkshire, England, where the wedding would take place. 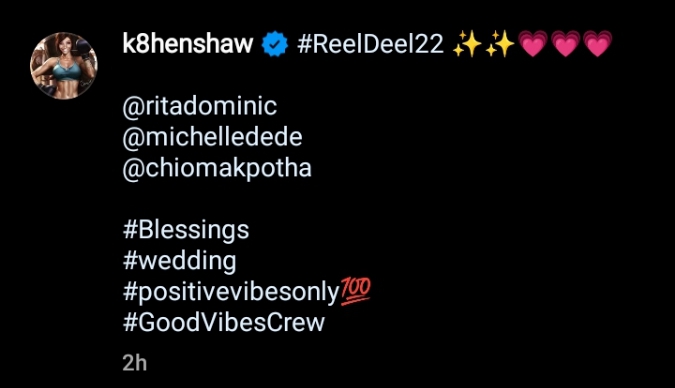